Work in Progress, currently writing up some roll tables to include. Then deciding if I want to make this into a two-pager to include some "Challenge, Focus, Strike" type seeds for Location Goals. For now, this is likely enough for me to start play testing and for you to try running the game yourself. Happy demon hunting!

Howdy folks! Following up, the past couple of weeks has been busy and I didn’t have a lot of time to work on the adventure.

But, one big thing I figured out was how to plan out the “Loot”. The plan is that the “wheel of discord”, which is a thing from the CRB, will help randomize legendary and ancestral loot drops, while also guiding the GM on when to incorporate each PC’s “Quest”. Looking forward to seeing it in action.

For Rare and “Magic” loot, that’s determined by whether or not Adversaries and enhanced Minions were included in the encounter.

Basic Loot is included in every encounter and as background items you can search for during any scene.

That being said, this was a huge hurdle I needed to figure out in order to start planning the first session to an upcoming playtest. Should have more to add after next week, and I may have an update ready this week for the adventure preview.

A question that I need to answer: what happens when a PC critically strikes a mob?

for a single minion, when they suffer a critical strike they just die. And it would be fun to say that a critical strike could just instant kill a mob of minions, but I just don’t know how that effects the challenge of the encounter.

For minion mobs, do keep in mind that the trade off for the GM is that they’re trading action economy for simplicity. I probably wouldn’t put more than 3-5 minions in a single mob.

For planning combat, the conflict rank of your NPCs in the scene should total to be equal to or around the total school rank of your PCs. You can start to increase the total conflict rank by 1 per each loot above basic loot that each PC gains over the course of the campaign. For PC Shugenja, I almost feel like their school rank should be treated as double for the purposes of calculating balance vs NPC conflict rank.

I also like the idea of throwing out the gridded map entirely and using “Fate-Style” combat. Fate is another TTRPG, but I think it’s combat works well when we think about range bands for 5e L5R. What you do is, lay out a few index cards, these represent different sections or “zones” of the battlefield/arena/building that the conflict takes place in. Write down on each index card at least 2 ”aspects”, these are terrain qualities, traps, or something useful the PCs can use. Then the PCs might add a third quality if they spend Opportunities to do so. Then use tokens or write down the names of different mobs, adversaries, and PCs to track what sections they’re in. It takes 1 rangeband to get within range 0-1 of a target that shares the same zone as you, 2 rangebands if the target is using some kind of Aspect in that zone to give themselves height or obstacles. It takes 2 rangebands to move to another zone.

This is more flavor than mechanical, but I also like the idea of the Player describing their action rather than saying what action or technique they want to use. Since players should be rolling for their actions before the start of their turn, and they have access to all the information surrounding the NPCs, they should know exactly how to describe the outcome.

I’ll be posting ideas on how to make combat blazing fast here in the comments. This is leading up until I make a multipage document of this adventure.

Initiative: I have to look at how important the initiative roll is. I know there’s a technique Tactical Assessment that lets you spend opportunities on your initiative roll, but… I don’t know if that’s so important that the following will break anything.

Session-start initiative roll, have the players roll initiative once and then that’s their value for the rest of the session.

Or, every combat the players go first, then the enemies. This allows the players to go into a combat, and say that the Shugenja always gets to set up and then the Bushi get to follow up with their attacks. Also makes sure the enemies don’t just straight up gank the players before they have a chance to set up. 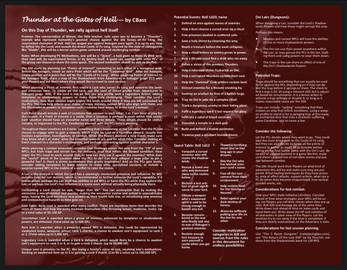